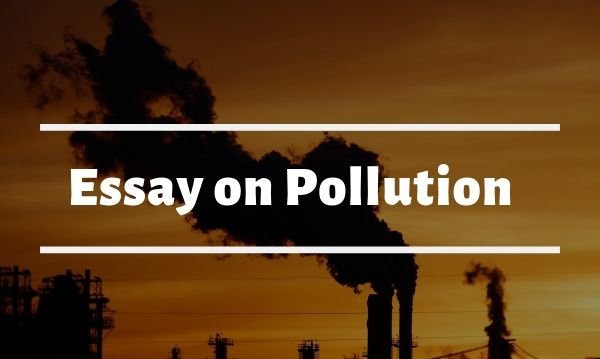 Essay On Pollution In English: The problem of pollution has become very serious today. Man has interfered too much with nature. As a result, environment which includes air, water, soil etc has been polluted. If environment is polluted, all sorts of life-human, animal and vegetation are affected directly or indirectly.

There are mainly four kinds of pollution:-

Air pollution is mainly caused by the smoke of industries, Factories, motor cars, smoking and burning waste. Air pollution affect our health, it causes coughing, asthma and other ling diseases.

Water pollution is said to occur when toxic pollutants and particulate matter are introduced into water bodies such as lakes, rivers and seas. These contaminants are generally introduced by human activities like improper sewage treatment and oil spills.

Soil pollution depicts the contamination of soil due to the presence of toxic substances such as excessive use of fertilizers and pesticides, deforestation, industrial waste etc.

Noise pollution is dangerous to life. It is said that 85 decibels causes deafness and other diseases. The common reasons behind raise pollution are the sound that comes from industry, planes and other sources that reaches beyond permissible limits.

How to reduce pollution:-

The pollution is a global problem. It is the collective issue and thereby, it needs a collective approach to end it. We should focus on Going Green, plant more trees, and eliminate waste in nature. We need to save agriculture. We should stop using excessive chemicals etc in agriculture to save our waste from being polluted. The world should not only look at the industry. Along with it, we need to strike a balance between industrial progress and the preservation of nature. The role of government, mass media and civil society is necessary.

The pollution is one of the dangerous issues that we all are facing. It would impact the entire world. There is no denying the fact. Instead, the world community should unite to save each other from the threats of pollution.

Essay No. 2 On Pollution

Pollution is a problem that has become more and more pressing over that last few decades. There is different kind of pollution. Which are air pollution, noise pollution, water pollution and soil pollution? All of which are incredibly harmful to the environment. These refer to contamination of the air by fumes or unwanted Noise contamination of water bodies and that of land.

Essay On Pollution In 250 Words

All the types of pollution are incredibly detrimental to the planet.

Urbanization refers to concept of rural towns and villages developing into urbanized towns and cities. Urban localities are characterized by having good infrastructure and prevalence of industry. Both of which are almost undoubtedly linked to each other. A lot of venture capitalists and Multinational Corporation select smaller, rural towns to start manufacturing business because the factors of production most often come cheaper there.  This means that the rent is lower, labor cost less etc.

Thus, it makes for a convenient place to open up good manufacturing factories there.

Essay No. 3 on Pollution

Introduction:- Pollution is a very serious problem these days. It is very harmful for human beings.

Causes of Pollution:- Mills and vehicles four pour smoke into the air. Thus air is polluted. The waste material of factories is dumped into the rivers and pure water is polluted.

Effects:- Thus we see that there is pollution everywhere. The environment has become unfit for living.

Due to pollution our life is affected. It causes many fatal diseases like T.B, Cancer, Asthma and eye flu. Noise pollution is harmful and it makes the people deaf.

Conclusion:- Government is doing a lot of work to fight against pollution. We hope that this problem will be solved very soon.

Essay No. 4 on Pollution

Pollution is a dangerous things and it affects us in different ways. Noise pollution leads to hearing trouble and it makes many people deft forever. Air pollution brings about lung trouble and damage to plant and crops. Lastly, water pollution causes many Steinbach disease.